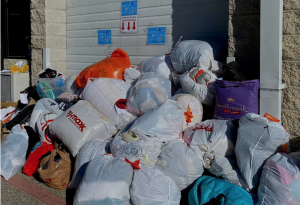 After having a very successful winter clothing drive, bags of donated items have been stacking up for Avenues Supported Living Services. Volunteers have collected over 400 bags of donations since the drive first started on Jan. 11. Avenues SLS hosts many events throughout the year to raise not only money but awareness for those with developmental disabilities.

Scott and Lori Shepard started the nonprofit corporation in 1997 with a vision of being “an agency that provides the best possible services to meet the unique needs of each of the people [it] support[s].” Scott said they’ve worked hard to “[provide] person-centered services and individualized support to people” in order to help them live the life they want.

The private non-profit provides assistance to members of the Santa Clarita community that have developmental and intellectual disabilities. These community members live independently but receive support through thoughtful contributions.

The group of people that Avenues supports is diverse. Shepard says, “We support people from their early 20s all the way to age 82.”

Donation drives allow those supported by the organization to receive items they may be unable to provide for themselves. Volunteers go through each bag of donations and sort them to fit the specific needs of each person they assist.

Mother Sue Heldoorn has been involved with Avenues SLS since her son, Dan, was seven years old. She said he has autism, among other conditions, and although he is now 42, she still contributes to the organization as a parent volunteer and board member. She described the Shepards as a strong support system during her son’s life. “We went through Dan’s childhood, his teenage years, and his adulthood with Lori and Scott behind us the whole time,” she added. Events like the clothing drive not only help the people who receive the items but make them feel more connected to the community as well, Heldoorn said. “They come into the office and volunteer… and they really like to help,” she said.

Items that can be donated include clothing, shoes, jackets, sweaters, backpacks and purses. Any items that are not used by the organization are given to other nonprofits to ensure that nothing goes to waste. Anyone interested in bringing in items can do so from 10 a.m. to 2 p.m. Monday through Friday until March 19. Avenues SLS is located in Valencia at 28415 Industry Drive, # 502.

An upcoming fundraiser called “Painting for a Purpose,” will be open to the community on March 25 at 6:30 p.m. Those interested can participate in person at the Painting With A Twist location in the Westfield Valencia Town Center or virtually and can click here for more information.